+84988660505 amazinghalongbay@gmail.com
Halong Bay gets 1969 islands and Islets , 989 of these Islands and Islets in Halong bay have own names. The Bay Halong contains two kinds of Islands , limestone and Schist , which are focused in two main areas: the southeast in the Bai Tu Long Bay and the southwest in the amazing bay Halong. There are many amazing limestone caves in the center of Halong bay belonging to the World Heritage sites of UNESCO.

Halong bay covers over 43,400 ha with 775 islands and Islets from the Island Dau Go (Driftwood Grotto) in the west to the lake Ba Ham (Three Shelter Lake) in the south and the island Cong Tay in the east.

From the sky , Halong bay looks like a geographic art work . We will get lost in the legendary world of limestone islands and Islets while discovering the bay. The Human head Island looks like a man standing and looking toward to the Halong city. Dragon island looks like a great dragon relaxing in the transparent water of Halong bay. And many lslands with amazing own names as sail island – Hon Canh Buom , fighting cock islands – Hon Ga Choi, Incense burner Islet – Hon Lu Huong were named by the fishermen of Halong bay. There are many limestone caves and grotto were created by the nature here such as Heavenly Palace ( Thien Cung cave), Driftwood cave ( Dau Go cave ) , Surprising cave ( Sung sot cave) and triple palace cave ( Tam Cung cave ).

Amazing Halong bay Vietnam related to the famous history of Vietnam such as the ancient port Van Don, the famous poem written by the Vietnamese emperor in the Bai Tho Mountain and the famous battle in Bach Dang river where 50,000 Mongolian were defeated by the first famous Vietnamese General Tran in 1288.

The archeologists discovered many existence of Pre-historical human in the area at such archeological sites as Dong Mang, Xich Tho, Soi Nhu, and Thoi Gieng. The biological diversity as water-flooded forests, coral reefs, and tropical forests featuring thousands of species of animal and plant life were found down in Halong bay.

Halong bay Vietnam was officially recognized as the world natural heritage site by UNESCO on December 17th , 1994 and become a New Seven Wonders voted by travelers over the world in 2012.

Things to do in Halong bay?


You can take a daily boat trip to enjoy Halong bay and discover the caves as Thien Cung Cave, Dau Go cave and Sung Sot Cave. You can get many amazing activities as fishing, kayaking or swimming in Halong bay. You also visit the great Cat Ba Island – this island is one of the most famous national park in Vietnam for hiking in the center of the park or relaxing on the beach Cat Co 1 or Cat Co 2.

Spending one romantic night on board in halong bay with many kinds of cruise as Luxury Halong bay cruises, Deluxe Halong Cruises or Superior Halong cruises will be the great choice when you visit here.
By Halong bay, there is famous island Tuan Chau . This is also great address for fun with water sport activities or some famous show as dolphin show, laser show.

When to visit Halong bay ?


Halong bay is visited year-round . In winter months from October to April is the best time to travel here but it will be chily cool in December, January and February. In summer months from May to September , it is lower season because of Typhoon so you should check the weather forecast before traveling Halong bay. You can visit this link for the weather of Halong bay.

How to get Halong bay ?


Halong bay tours are available in Hanoi so you can booked by your self . The tours to Halong bay included shuttle bus, tourguides, meals, boat for Halong daily trips or overnight on board in Halong bay.
Or If you travel by yourself, you can get the local bus from Luong Yen Bus station or My Dinh bus station , it costs USD 10.00 to USD 15.00 / per way from Hanoi to Halong city. 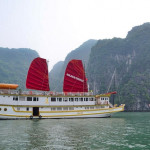 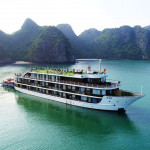 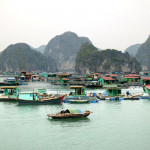 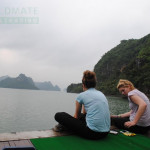 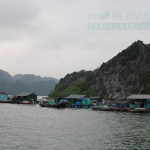